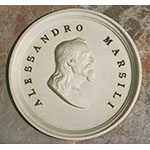 Marsili was born in Siena and obtained degrees in law (1622) and philosophy (1623) from the university there. In 1627, his alma mater appointed him lecturer in logic, and later in philosophy. He met Galileo (1564-1642), after the scientist's trial, in the house of the archbishop of Siena, Ascanio Piccolomini (c. 1590-1671). In 1638, he was named to the chair of philosophy at the University of Pisa, becoming Provost of the University in 1662. He was a member of the Accademia del Cimento, but his outspoken Aristotelianism prevented him from espousing the society's innovative spirit. He proposed an experiment to determine whether the empty space left in the barometric tube during Torricelli's experiment contains mercury vapors.