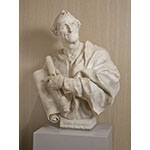 After a humanist education in fifteenth-century Florence, Amerigo Vespucci engaged in commercial and financial ventures. Sent to Seville by Lorenzo di Pierfrancesco de' Medici, he settled there and began to work with the Spanish and Portuguese travelers who, in the wake of Christopher Columbus, were leaving Europe to explore the New World. Documentation on Vespucci's activities is scarce, and the authenticity of his most famous letters - which began to circulate in his own lifetime - is doubtful: to this day, there is no consensus on the issue among historians. It is therefore impossible to determine even the actual number of ocean voyages in which Vespucci took part. However, we do know for certain that he traveled extensively along the South American coast, from Venezuela to Brazil. He was the first to realize that this was a new continent and not a hitherto unknown part of Asia - where it would have been impossible to encounter the populations, flora, and fauna that he did. A cartographer, expert in star positions, and accomplished user of quadrants and astrolabes, Vespucci succeeded in finding longitude at sea from lunar distance. The King of Spain, Ferdinand II of Aragon, appointed him "Pilot Major" of Castile, in charge of supervising the preparation of exploration campaigns to the new continent and the training of crew members in instrument use.