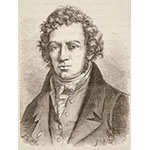 One of the greatest French physicists of the first half of the nineteenth century. Professor at the École Polytechnique and the Collège de France, fellow of the Académie Royale des Sciences of Paris, appointed Inspector General of the Universities by Napoleon in 1809. Worked in chemistry and mechanics, but by far his most important research was in electrology. Indeed, thanks to his pathbreaking work on the reciprocal effects of currents and on the effects of currents on magnets, Ampère may be regarded as the father of classical electrodynamics. His hypothesis on the existence of molecular currents provided a link between magnetic and electrical phenomena. A leading contributor to the mathematization of electrical theories, his 1827 treatise, Mémoire sur la théorie mathématique des phénomènes électrodynamiques, was a seminal work in the development of electrodynamics. Took an interest in some practical applications of electricity such as telegraphy. Also authored works on philosophy and psychology, in which he put forward pioneering ideas and analyzed, for example, the generation of sensations.