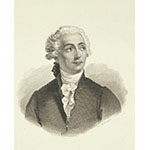 Lavoisier began his legal studies at the instigation of his father, an attorney. At the same time, however, he attended courses in mathematics, physics, botany, and geology, which consolidated his youthful interest in science. He earned his law degree from the Sorbonne in 1764, but never entered the profession. Instead, his curiosity drove him to develop contacts with the Académie Royale des Sciences, to which he was elected in 1768. Thanks to his positions in public administration, first in the Ferme Nationale (the tax-collection body), then at the Arsenal in Paris, Lavoisier had the time and means to pursue the natural sciences. His methodological revolution - which he accomplished using instruments designed ad hoc - freed chemistry from alchemical influences. It gave chemistry the rigor and rank of a modern science, fostering a massive increase in knowledge within the space of a few years. But the newborn science had to contend with the obsolescence of an antiquated, arbitrary language. Accordingly, Lavoisier - with Berthollet, Fourcroy, and Guyton de Morveau - published a treatise entitled Méthode de nomenclature chimique [Method of Chemical Nomenclature] (Paris, 1787), which classified the names of substances using the new rules. In Traité élémentaire de chimie [Elementary Treatise of Chemistry] (Paris, 1789), the first manual of modern chemistry, Lavoisier set forth the knowledge acquired through his efforts: air is not a simple, chemically passive element, but is composed of several gases that enter into the combination of bodies; water is a compound of hydrogen and oxygen, the latter being an element isolated by Lavoisier himself; the alchemical concept of transmutation is an impossibility; and the phlogiston does not exist. During the Revolutionary Terror, Lavoisier incurred the Jacobins' hatred for having occupied prominent positions under the Ancien Régime in the fields of education, welfare, public health, taxation, and finance. His scientific achievements were rejected as mitigating circumstances, and he was guillotined on May 8, 1794.