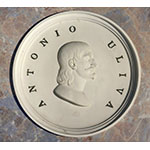 At age nineteen, Antonio Oliva was appointed theologian by Cardinal Francesco Barberini (1597-1679). In 1647-1648, Oliva took part in the anti-Spanish rebellion. For this, he was arrested and incarcerated in the castle of Reggio Calabria, where he remained until 1652. He began visiting Tuscany in c. 1657, and held the chair of theoretical medicine at the University of Pisa in 1663-1667. Oliva participated in the work of the Accademia del Cimento, showing a distinct preference for hydraulics. His treatise on the subject has survived only in manuscript: Tavola sinottica sopra l'acqua, now in the Galileo collection at the Biblioteca Nazionale Centrale in Florence. During his stay in Tuscany, he also wrote a commentary on the Libro Quinto di Euclide [Fifth Book of Euclid], preserved, also in manuscript, in the Biblioteca Medicea Laurenziana in Florence. Oliva left Pisa in 1667 and returned to Rome. Accused of membership in the Accademia dei Bianchi - an unorthodox, free-thinking Francophile movement led by the prelate Pietro Gabrielli - he was arrested and tried by the Inquisition Tribunal. During the trial, to avoid a criminal procedure, he threw himself out of a window of the Palace of the Holy Office.