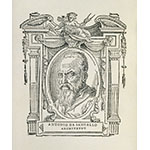 Civil and military architect, Antonio da Sangallo the Younger was trained at the famous Florentine workshop run by his uncles, Giuliano (1443/45-1516) and Antonio da Sangallo the Elder (c. 1455-1534). In 1503, went to Rome, where he stayed for nearly all his life, together with his uncle Giuliano, in the service of the Medici Popes Leo X (1475-1521, Pope from 1513) and Clement VII (1478-1534, Pope from 1523). Was entrusted with critical tasks such as the supervision of the construction of Saint Peter's (as Raphael's successor, in 1520), the construction of the Palazzo Farnese (later completed by Michelangelo), that of the church of Santa Maria di Loreto in the Trajan Forum (1507), the Sala Regia (1537) and Pauline Chapel in the Vatican, and other public and private buildings such as the Mint (now Banco di Santo Spirito), the Palazzo Baldassini, and the Palazzetto Le Roy. As military architect, designed the urban fortifications of Rome, the Caprarola fortress (1515), later converted into a villa by Vignola, the Fortezza da Basso in Florence (1534-1537), and the fortress of Ancona (1537). Antonio the Younger took a keen interest in technology and mathematical instruments.