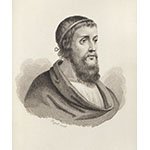 One of the greatest mathematicians and inventors of antiquity. Born in Syracuse, moved in his youth to Alexandria. There, he made productive contacts with eminent scholars who had settled in the city, attracted by the Museum and Library. Returning later to Syracuse, he spent the rest of his life there until 212 B.C.E., when, during the Second Punic War, he was slain by a Roman soldier.

Archimedes made a vast contribution to geometry and mechanics. He studied curves, figures, and geometric solids, as well as the solids generated by the rotations of parabolas, ellipses, and hyperbolas.

In his study of the behavior of the centers of gravity in plane geometrical figures and solids, and in his innovative work on the theory of levers, he reached extraordinary results that earned him the admiration of leading mathematicians for many centuries. Archimedes is also regarded as the founder of hydrostatics, a discipline for which he was the first to establish a set of fundamental laws. One of these, known as "Archimedes' principle," states that a body immersed in a fluid experiences an upthrust equal to the weight of the displaced liquid.

Lastly, the Syracusan scientist has been celebrated since antiquity for inventing extremely efficient mechanical devices: the manus ferrea [iron hand], a machine for overturning enemy ships after raising them by means of a claw connected to a crane; burning mirrors; a working model of the universe; a water clock; the screw; the hydraulic organ; and a combination of machines that enabled one man to haul a large, heavy ship ashore.