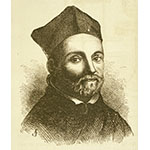 Born in Geisa (Germany), Kircher joined the Society of Jesus in 1616. He first read mathematics and philosophy at Würzburg, then moved to Avignon and lastly to Rome, where he was appointed teacher of mathematics at the Collegio Romano c. 1638. A prolific writer of European fame, Kircher authored works on subjects ranging from philology to physics, sacred writings, astronomy, natural history, mathematics, music, Egyptology, geography, and Chinese civilization.

His scientific writings include Magnes, sive de ars magnetica (1641), Ars magna lucis et umbrae (1645), Mundus subterraneus (1665), Organum mathematicum (1668), and Musurgia universalis (1650). In the Musurgia, Kircher tells of having performed an experiment that convinced him of the impossibility of a vacuum in nature. The experiment, which he conducted with Gaspero Berti (c. 1600-1643), consisted in inserting a bell in the part of the barometer in which - according to the "vacuists" - the vacuum should be produced. Using a magnet outside the apparatus, they made the bell clapper move. According to Kircher, the bell's sound was distinctly audible, demonstrating the presence of air through which it was transmitted. A similar experiment was performed by Robert Boyle (1627-1691), using the air pump, with exactly the opposite results. Boyle claimed that, after the removal of air, the sound was no longer heard.