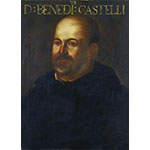 Castelli, a Benedictine monk, studied with Galileo (1564-1642) in Padua and became extremely devoted to him. Throughout his life he assisted and supported the Pisan scientist. He was also Galileo's main scientific collaborator. Castelli distinguished himself in astronomy and hydraulics. His justly celebrated work, Della misura delle acque correnti (Rome, 1629) inaugurated modern hydrodynamics. He taught mathematics at the University of Pisa, where he had Bonaventura Cavalieri (1598-1647) as a pupil, and later at La Sapienza in Rome, where he assembled a group of exceedingly gifted students including Evangelista Torricelli (1608-1647) and Giovanni Alfonso Borelli (1608-1679).