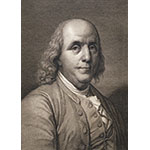 Statesman, philosopher, and first major North American scientist, Franklin was born into a Calvinist family with roots in Oxfordshire. After less than two years of formal schooling, he began his career as a progressive publisher and journalist. These pursuits brought him fame and a comfortable income. His scientific research focused on electricity. Having observed that pointed objects could discharge electrically charged bodies, and after conducting a series of experiments, Franklin developed the theory of a single electric fluid that could accumulate and be in excess (positive charges) or in deficit (negative charges) on conductors. The total sum of charges had to net out to zero. In 1752, Franklin suggested the possibility of discharging storm clouds by means of a metal shaft connected to the ground: the lightning rod. Studied meteorology and general technology, and invented a stove that became quite popular. Member of many scientific academies and one of the artisans of American independence, he played an intensive role as mediator between the United States, France, and England. In particular, he lobbied to obtain French support for the revolutionary cause. Elected to the first U.S. Congress, he drafted the Declaration of Independence with Thomas Jefferson and John Adams (1776). After the Revolutionary War, was a leading negotiator of the peace treaty with Great Britain. In 1785, elected President of the State of Pennsylvania.