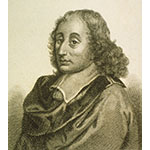 Born in Clermont-Ferrand (France), the young Pascal was introduced to mathematics and physics by his father. So precocious was his talent in these disciplines that he published his innovative Essai pour les coniques [Essay on conics] in 1640, at only sixteen. In 1631, he moved to Paris, where he frequented the intellectual circle of Marin Mersenne (1588-1648) - a forum for the discussion of the most topical scientific and philosophical questions. In 1644, he became interested in the technological aspects of scientific research, devising a calculating machine that could perform additions and subtractions. In 1646, he conducted path-breaking research on the vacuum and fluid dynamics. He devoted two major works to fluids - Équilibre des liqueurs [Equilibrium of liquids] and De la pesanteur de la masse d'air [On the weight of the mass of air] - written in 1651-1654, but not published until 1663. In 1653-1654, he composed some brief but seminal papers on combinatory calculus, infinitesimal calculus, and probability. Pascal repeated Evangelista Torricelli's experiment, using various liquids and containers of different shapes and sizes. This research, in addition to the publication of Expériences nouvelles touchant le vide [New experiments on the vacuum], culminated in the famous experiment performed in 1648 on the Puy-de-Dôme, in which he demonstrated that atmospheric pressure lessens with an increase in altitude.

In parallel with his scientific pursuits, Pascal displayed a deep and abiding concern with religious and moral issues. In his youth, he espoused Jansenism and began to frequent the Port-Royal group. These contacts form the background to the Lettres provinciales (1656-1657) and the Pensées (published posthumously in 1670).