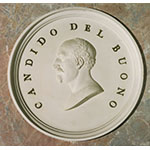 Candido Del Buono, a Florentine priest, attended Famiano Michelini's (1604-1665) mathematics lectures with his brother Paolo (1625-1659). Del Buono was the Chamberlain of the Hospital of Santa Maria Nuova in Florence and a member of the Accademia del Cimento, where he presented several instruments of his invention. There is no clear documentary evidence of whether he or his other brother Anton Maria was the inventor of the arcicanna, a complex system that solved some typical problems of large telescopes in the second half of the seventeenth century.