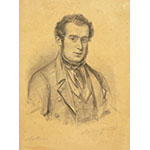 Italian physicist and physiologist, specializing in optics, electromagnetism, electrophysiology, and geology. From his youth, conducted research in electrochemistry and electrophysiology, which led him to formulate the laws of electrolysis independently from Michael Faraday (1791-1867). In 1840, the Grand Duke of Tuscany, Leopold II (1797-1870), appointed him lecturer in experimental physics at the University of Pisa. Regarded as one of the precursors of electrophysiology, he was the first to discover muscular current, i.e., the electrical phenomenon linked to muscular effort. Also studied phenomena of electromagnetic induction and rotational magnetism. In 1844 he co-founded “Il Cimento: Giornale di fisica, chimica e storia naturale”, closed in 1847 and re-founded in 1855 as “Il Nuovo Cimento”, which became the official journal of the Società Italiana di Fisica in 1897. Minister of Education in 1862. Elected to the Società Italiana delle Scienze in 1866.