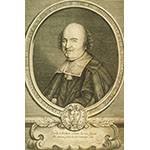 A nobleman from Ancona, Carlo Renaldini became the first lecturer in philosophy at the University of Pisa in 1644. He was one of the most active members of the Accademia del Cimento, proposing numerous experiments. Renaldini was an ambiguous figure, tempted to adopt the innovative Galilean philosophical-scientific approach, yet still imbued with the attitudes and prejudices of Aristotelianism. During the academicians' work, he often clashed with Giovanni Alfonso Borelli (1608-1679). He performed astronomical observations with Toscanelli's gnomon in the basilica of Santa Maria del Fiore in Florence. He tutored Prince Cosimo III (1642-1723). In 1667, he obtained the chair of philosophy at the University of Padua. His many works include Ars analytica mathematicum (Florence-Padua, 1665-1669), De resolutione et compositione mathematica (Padua, 1668) and Philosophia rationalis, naturalis atque moralis (Padua, 1681).