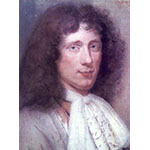 A towering figure in mathematics, physics, astronomy, and optics, the Dutchman Christiaan Huygens was one of the founders of mechanics and optical physics. In Traité de la lumière [Treatise on light] (1690), he formulated hypotheses about light waves. Using the telescope he perfected, Huygens discovered Saturn's ring and conducted astronomical observations of the planets, the Orion nebula, and the Moon. He illustrated these observations in Systema Saturnium (The Hague, 1659), dedicated to Prince Leopold de' Medici (1617-1675). Huygens corresponded with the Tuscan scientific community at the time of the Accademia del Cimento, principally on the subject of Saturn's ring. He engaged in a controversy - which resonated across Europe - over the Saturnian system proposed by Honoré Fabri (1607-1688). Huygens became embroiled in another dispute, chiefly with Vincenzo Viviani (1622-1703), over the application of the pendulum to the clock: the Dutch scientist claimed priority for the invention, which Viviani attributed to Galileo. Huygens is also remembered for inventing the eyepiece that bears his name.