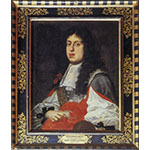 Son of Ferdinand II (1610-1670), he succeeded his father in 1670. Under his reign, rising taxes hastened a general impoverishment. The overriding concern, especially in later years, was the succession problem. Official efforts to support and promote the Galilean tradition in science and natural philosophy gradually weakened. This change of attitude was long viewed as a consequence of the influence on the Grand Duke of pious and reactionary counselors. The more likely explanation is that Cosimo's reign coincided with the end of a regression in Tuscan scientific research - a downtrend that had begun in the late 1650s.