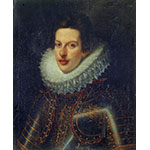 Succeeded his father Ferdinand I (1549-1609) as Grand Duke of Tuscany in 1609. In the first years of his reign, he was under the influence of his mother, Christina of Lorraine (1565-1636). His chief foreign-policy concern was to preserve peace through the arduous equilibrium between the two major European powers: France and Spain. He strengthened the navy and the merchant marine, and developed Leghorn harbor by having a pier built there. In his youth, he had been taught mathematics by Galileo Galilei (1564-1642), whom he recalled from Padua to Tuscany in 1610, after the Pisan scientist's astronomical discoveries.