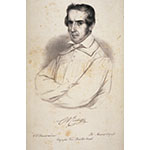 Born into a noble Florentine family, Ridolfi was a politician, philanthropist, and agronomist. On his estate in Meleto, near Castelfiorentino, he founded Italy's first agrarian institute. He promoted agricultural innovations and served in key positions in the Tuscan government. In 1827, with Giovan Pietro Vieusseux (1779-1863) and Raffaello Lambruschini (1788-1873), he founded the Giornale agrario toscano. Ridolfi was professor of agriculture at the University of Pisa, and presided the Accademia dei Georgofili in Florence between 1842 and 1865. In 1859, Ridolfi asked the Scolopians Filippo Cecchi (1822-1887) and Giovanni Antonelli (1818-1872) to manufacture two large meteorological instruments - a barometer and a thermometer - to be installed for public use in the Loggia dei Lanzi on the Piazza della Signoria in Florence. As a prominent politician, he played an important role in the unification of Tuscany with the Sardinian kingdom. After the unification of Italy (1860), he became National Minister of Education and Senator.