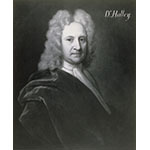 Born in London. Entered Oxford University in 1673, where he became interested in mathematics and astronomy. At the age of twenty, traveled to Saint Helena to survey the constellations of the southern sky. On his return to England, published the Catalogus Stellarum Australium (London, 1678) and was elected fellow of the Royal Society. Later travels took him on diplomatic missions to Germany, France, and Italy, where he met the leading scientists of his time. Determined the distance of the Sun thanks to the transit of Mercury across its disk in 1677. Supported and encouraged the scientific work of Isaac Newton (1642-1727), editing and financing the publication of his Principia (London, 1686). Appointed professor of geometry at Oxford in 1704. His interest in archeology, the history of mathematics, and the history of astronomy dates from these years. Translated and published many ancient Greek texts. Halley's fame derives from his discovery of the periodicity of several comets. In A Synopsis of the Astronomy of Comets (London, 1705), he noted the consistent 76-year intervals between the appearances of the comets studied by Peter Bienewitz (Apianus; 1501-1552) in 1531, by Johann Kepler (1571-1630) in 1607, and by himself in 1682. He concluded that each set of observations concerned successive passages of the same comet - later named Halley's comet - which, he forecast, would return in 1758. In 1718, published a paper demonstrating that the so-called fixed stars actually had measurable motions. In 1720, succeeded John Flamsteed (1646-1719) as Astronomer Royal, spending the remainder of his scientific career at the Greenwich Observatory. In 1729, was appointed foreign member of the Académie Royale des Sciences of Paris. In 1731, after many years of studying the Moon, Halley perfected the method for measuring terrestrial longitudes from "lunar distances." However, he recommended funding John Harrison's (1693-1776) plan to build a nautical chronometer that would provide better results.