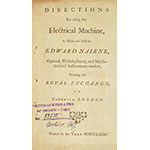 Skilled English maker of scientific instruments, active in London from around 1750 on. Chiefly known for his electrical machines, he also made mathematical, navigational, and geodesic instruments. Between 1774 and 1793, Nairne formed a partnership with Thomas Blunt (?-1822), his apprentice since 1760. He perfected the Cuff microscopes, making them more compact and easier to transport. In 1776, he was elected a Fellow of the Royal Society of London. In 1782, he received a patent for medical electrical machine.