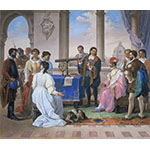 Orphaned at a very early age, Divini was forced to leave school for a military career. With the help of his brothers Vincenzo and Cipriano, he was eventually able to resume his studies in Rome. There, he may have attended lectures by Benedetto Castelli (1577/8-1643), which gave him the basic training for the study of Euclidean geometry and of astronomy. By the mid-seventeenth century, he was already known as an optical-instrument maker. He soon became one of the most skilled telescope- and microscope-makers of his time. He also wrote astronomical works, such as the Brevis annotatio in Systema Saturnium Christiani Eugenii [Short annotation on the Saturnian system of Christiaan Huygens] (Rome, 1660), dedicated to Leopold de' Medici (1617-1675), brother of the Grand Duke of Tuscany. In this work he claimed priority over Christiaan Huygens (1629-1695) for the observation and discovery of Saturn's satellites. Divini repeatedly stressed the importance of astronomical discoveries made by several scientists thanks to his telescopes. In his later years he returned to his native town, San Severino Marche, where he died in 1685.