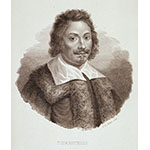 After two years of study "under the discipline of the Jesuit Fathers," Torricelli became a pupil of Benedetto Castelli (1578-1643) at eighteen. Not much is known of the young Torricelli's life between 1632 and 1641. He joined the staff of Giovanni Ciampoli (1589-1643), a friend and admirer of Galileo (1564-1642), sent to the Marche as Governor. During this period, Torricelli conducted a thorough study of Galileo's theory of motion. He returned to Rome in early 1641 but left for Florence in early October to assist Galileo in the last months of his life. After Galileo's death, Ferdinand II de' Medici (1610-1670) appointed Torricelli Granducal Mathematician and lecturer in mathematics at the University of Pisa. In Florence, he undertook research in geometry. In particular, he perfected Bonaventura Cavalieri's (1598-1647) method of indivisibles, for example by introducing curved indivisibles. In 1644, Torricelli published Opera Geometrica. In the same year, he performed the celebrated experiment demonstrating the effects of atmospheric pressure. He also developed a consummate skill in grinding telescope lenses. His lenses were of excellent quality and avidly sought after. Struck by a grave illness while still young, he died in Florence in the night of October 24-25, 1647. After his death, a painstaking but fruitless search was carried out to discover the "secret of the spectacles," i.e., Torricelli's methods for producing lenses of unmatched perfection.