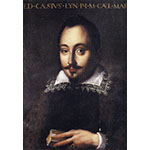 The scion of a noble Roman family, Cesi displayed since his earliest youth a strong commitment to the renovation of traditional culture, perhaps under the influence of Jan van Heek (1577 - c. 1620). This led him to found and promote the Accademia dei Lincei. He was particularly close to Galileo (1564-1642), to whom he offered substantial support, particularly in the Pisan scientist's clash with ecclesiastical authorities. Here, Cesi exploited his influential position in the Roman nobility. He undertook valuable research in botany and natural history. Also noteworthy is a work on the desirability of a radical reform of learning. His sudden death led to the dissolution of the Accademia and left Galileo alone against the superior forces of his adversaries. Cesi suggested the name "telescope" for the instrument developed by Galileo. Later (1624), he approved the name "microscope" suggested by Faber (1574-1629) for the occhialino ["little spectacle"] invented by Galileo.