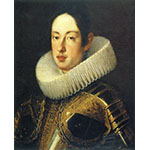 Ferdinand II succeeded his father Cosimo II (1590-1621) in 1621 as Grand Duke of Tuscany, under the regency of his grandmother, Christina of Lorraine (1565-1636), and his mother, Maria Maddalena of Austria. He fostered maritime commerce, developing Leghorn harbor and signing trade treaties. He consistently supported Galileo (1564-1642) and encouraged his experimental research. During the 1633 trial, he sought to have the Holy Office acknowledge Galileo's innocence and allow him to continue his studies. After Galileo's condemnation, Ferdinand cautiously attempted to have the decision annulled or mitigated. In the mid-1640s, the Grand Duke introduced informal experimentation at his court. Experiments were carried out with the first-ever thermometers, air humidity was determined with the condensation hygrometer, and "the heaviness and the lightness of any liquid" was measured with the hydrometer. In 1644, in the citrus greenhouses of the Boboli Garden, a type of artificial incubator was tested to hatch chicks. The system was regulated according to the temperature shown on a 60-degree thermometer placed under a brooding hen. These experimentation programs laid the groundwork for the Accademia del Cimento, founded in 1657 by Ferdinand's brother Leopold (1617-1675).