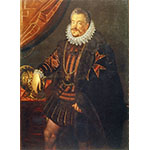 Son of Cosimo I (1519-1574), he was made a cardinal in his youth, but he left the religious life to become Grand Duke in 1587, when his brother Francesco I (1541-1587) died without leaving male heirs. He promoted the development of Leghorn harbor and built up the Medici collections of art, natural history, and scientific and technical instruments. Following the custom of the great sovereigns of his time, he financed research expeditions such as the voyage to Crete by the Flemish botanist Giuseppe Casabona (originally Joost Goedenhuyze, c. 1535-1595) - a voyage repeatedly mentioned in the major botanical texts of the late sixteenth and early seventeenth centuries. Ferdinand I was in very close contact with Ulisse Aldrovandi (1522-1605), and provided unstinting support for the systematic collection of miniatures (flowers, plants, animals) initiated by Francesco I. The Grand Duke also displayed the same interest as Cosimo I for mathematical disciplines - a taste that had not been shared by Francesco I. The Grand Duke offered to print a series of Greek mathematical texts never before published (many manuscripts, marked up for the printer, survive in the Magliabecchi collection at the Biblioteca Nazionale Centrale of Florence). He was particularly attentive to the education of his son, the future Cosimo II (1590-1621), whose teachers included Galileo (1564-1642).