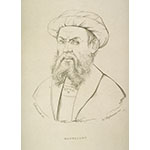 A Portuguese navigator employed by Spain, Magellan believed in the existence of a passage from the West to the Indies. Convinced Charles V (1500-1558) to fund the search. On September 20, 1519, left on an expedition to the southern part of the American continent. Discovered Patagonia and Tierra del Fuego. On November 28, 1520, crossed the strait that was later named after him, venturing into a vast ocean where no westerners had ever sailed before. For the entire three months of north-westerly navigation, the ocean remained calm, prompting the travelers to call it the Pacific. Magellan sailed on to the Philippines, where, on April 27, 1521, he was killed by natives on the small island of Mactan.