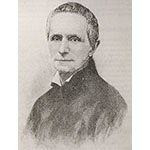 A Scolopian father, born in Ponte Buggianese in Valdinievole (Tuscany), Cecchi was an accomplished physicist and an able maker of scientific instruments. His teaching and scientific research centered on electromagnetism, telegraphy, and - more particularly - on meteorology and seismology. He directed the Osservatorio Ximeniano in Florence between 1872 and 1887. Under his stewardship, the meteorological station flourished. Cecchi promoted the establishment of other meteorological stations in Tuscany (Fiesole, Lugliano, Pescia, La Verna) and endowed the Osservatorio Ximeniano with an important seismological center. Cecchi invented and personally built various type of seismographs. He was elected Vice President of the Italian Meteorological Society, which held its first Congress in Florence in 1885.