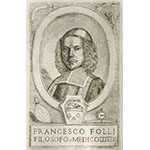 Born in Poppi in Casentino (Arezzo), Folli obtained his doctorate in philosophy and medicine from the University of Pisa in 1648. He began to practice medicine first in his home town, then in Bibbiena. In 1664, he invented the "instrument for determining the degrees of humid and dry of the air," which he called mostra umidaria. In 1665, having settled in Florence, he presented the instrument to Grand Duke Ferdinand II de' Medici (1610-1670) who - as Folli himself reported - "seemed to appreciate it, and had some copies made, which he promptly sent to various Princes of Europe." Particularly brilliant were his researches on blood transfusion, a field in which he is considered one of the first experimenters. Folli is the author of Stadera medica nella quale oltre la medicina infusoria ed altre novità si bilanciano le ragioni favorevoli e contrarie alla trasfusione del sangue [Medical balance in which, besides infusion medicine and other novelties, the reasons for and against blood transfusions are weighed] (Florence,1680).