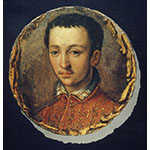 Son of Cosimo I de' Medici (1519-1574) and of Eleanor of Toledo, Francesco became Grand Duke of Tuscany at his father's death in 1574. In 1565, he had married Joan of Austria, sister of Emperor Maximilian II (1527-1576), who influenced her brother's decision to grant the Medici the Granducal title. Remembered by his subjects more for his extravagances than for enlightened patronage, Francesco I sponsored many civic and cultural initiatives, such as the expansion of Leghorn harbor, the foundation of the Uffizi Gallery in 1581, and the construction of the Studiolo in the Palazzo Vecchio. He encouraged the study of natural science, and his promotion of alchemical research - in which he was a direct participant - led to the invention of what became known as Medici ceramic.