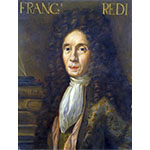 Born in Arezzo, Francesco Redi studied at the Jesuit school in Florence and graduated in medicine from Pisa in 1647. After visiting Rome, Naples, Bologna, Padua, and Venice, he began practicing medicine. In 1666, Grand Duke Ferdinand II (1610-1670) appointed him Chief Physician and superintendent of the Granducal spezieria [pharmacy] and fonderia [foundry]. Cosimo III (1642-1723) kept him in these functions, which he held until his death - a classic example of a dual career as scientist and courtier. Redi effectively applied the Accademia del Cimento's experimentalism to the natural sciences.

His first scientific work was Osservazioni intorno alle vipere [Observations concerning vipers] (Florence, 1664). Addressed to Lorenzo Magalotti (1637-1712), the memoir identifies the location of the viper's poison and explains its toxic effect. Redi's true masterpiece - a milestone in the history of modern science - was Esperienze intorno alla generazione degl'insetti [Experiments concerning the generation of insects] (Florence, 1668). The work, dedicated to Carlo Dati (1619-1676), refutes the age-old theory of spontaneous generation of insects and parasites with a decisive experiment. Redi introduced into the scientific method a serial procedure and a comparison between research experiments and control experiments. In 1671, he published Esperienze intorno a diverse cose naturali, e particolarmente a quelle che ci son portate dall'Indie [Experiments concerning various natural things, particularly those that come to us from the Indies]. The book was dedicated to Father Athanasius Kircher (1602-1680), criticized in the preceding work for his defense of spontaneous generation. Redi intensified his attack on the unreliability of Jesuit experimental science. In 1684, Redi completed his biological tetralogy with the publication of Osservazioni intorno agli animali viventi che si trovano negli animali viventi [Observations concerning live animals found in live animals], a treatise on the study of parasites and on comparative anatomy. A second section was planned but never published.

In medicine, Redi advocated a reform of therapeutics based on the prescription of simple remedies, which - according to the rules of Hippocratic humorism - should cleanse the organism of superfluous impurities. Redi played a decisive role in identifying the etiology of scabies, studied by Giovan Cosimo Bonomo (1666-1696) and Giacinto Cestoni (1637-1718): he showed that the infection was caused by a microscopic mite laying eggs under its hosts' skin.

Redi was also a distinguished man of letters. As a member of the Accademia della Crusca, he participated actively in the drafting of the third edition of the Vocabolario (1691). One of his most successful literary works was the famous dithyramb Bacco in Toscana [Bacchus in Tuscany], published in 1685 with many erudite annotations. In 1670, he began a diligent compilation of a Vocabolario di alcune voci aretine [Vocabulary of some words from Arezzo].