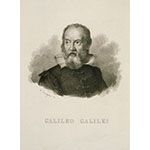 In the Padua years, he conducted studies and experiments in mechanics, built the thermoscope, and invented and built the geometric and military compass. In 1594, he patented a water-lifting machine. In 1609, he developed the telescope, with which he performed the observations that led him to the discovery of Jupiter's moons. In 1610, he was appointed mathematician and philosopher to the Grand Duke of Tuscany. He studied the peculiar appearances of Saturn and observed the phases of Venus. In 1611, he went to Rome, where he joined the Accademia dei Lincei and observed sunspots. In 1612, opposition arose to the Copernican theories, which Galileo supported. In 1614, from the pulpit of Santa Maria Novella, Father Tommaso Caccini (1574-1648) denounced Galileo's opinions on the motion of the Earth, judging them dangerous and close to heresy. Galileo went to Rome to defend himself against these accusations. However, in 1616, Cardinal Roberto Bellarmino (1542-1621) personally handed Galileo an admonition enjoining him to neither advocate nor teach Copernican astronomy, because it was contrary to the accepted understanding of the Holy Scriptures. In 1622, Galileo wrote the Saggiatore [The Assayer], which was approved and published in Rome in 1623. In 1624, he developed the first known example of the microscope. In 1630, he returned to Rome to apply for a license to print the Dialogo dei Massimi Sistemi [Dialogue on the Great World Systems], published in Florence in 1632. But in October of that year, he was ordered to appear before the Holy Office in Rome. The court issued a sentence of condemnation and forced Galileo to abjure. He was confined in Siena and eventually, in December 1633, he was allowed to retire to his villa in Arcetri. In 1634, he was deprived of the support of his beloved daughter, Sister Maria Celeste (1600-1634), who died prematurely. In 1638, when he was almost totally blind, the Discorsi e dimostrazioni intorno a due nuove Scienze [Discourses and demonstrations on two new Sciences] was published in Leiden. Galileo died in Arcetri on January 8, 1642.