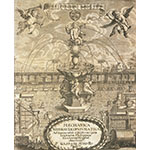 Nothing is known of Schott's origins and childhood except for his date and place of birth (Königshofen, near Würzburg). He entered the Society of Jesus in 1627 and studied at the University of Würzburg under the tutorship of Athanasius Kircher (1602-1680). He left Germany in 1631 and, after some travel, settled in Palermo for 20 years. In 1652, he was sent to Rome and was able to revive his scientific partnership with his master, Kircher. Three years later, he moved back to Germany, first to Mainz, then to Würzburg, where he taught mathematics and physics until his death.

Schott is particularly famous as the author of the Mechanica hydraulico-pneumatica (1657), which contains some of the earliest descriptions of experiments on the vacuum - including von Guericke's celebrated experiment. Through intensive correspondence and other means, Schott compiled reports and opinions from the most important savants - such as Otto von Guericke (1602-1686), Christiaan Huygens (1629-1695), and Robert Boyle (1627-1691). In so doing, he contributed significantly to the diffusion of the latest developments in pneumatics. He was, for example, the first in Germany to report Boyle's studies on the air pump. At the theoretical level, Schott claimed that the experiments by von Guericke, Torricelli (1608-1647), and Boyle had not produced real vacuums, because the space freed from air was in fact filled with ether, a more impalpable and refined matter. Nevertheless, he recognized that the effects traditionally ascribed to the horror vacui were in fact produced by the pressure and elasticity of air.