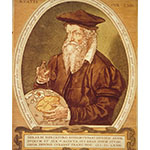 One of the greatest geographers of the sixteenth century. Of Flemish origin, Gerhard Kremer Latinized his last name to Mercator when he entered the University of Louvain in 1530. Studied philosophy, theology and - under the guidance of Gemma Frisius (1508-1555) - mathematics and astronomy. His geographic maps soon became renowned across Europe thanks to his innovative projection system, which still bears his name. Also produced major celestial and terrestrial globes. From 1552 onward, continued his intensive mapmaking activities in Duisburg.