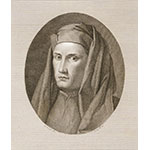 Celebrated Tuscan painter and artist (Colle di Vespignano in Mugello is traditionally regarded as his birthplace). Probably began his artistic career in Florence with Cimabue (1240-1301). His main works include the Stories of the Old and New Testaments (c. 1290) and the Life of Saint Francis of Assisi (c. 1300) in the Basilica Superiore of Assisi; and the frescoes of the Cappella degli Scrovegni in Padua (1304-1305). Appointed master-builder of the Opera del Duomo of Florence in 1334. That same year, began the construction of the Campanile [Bell Tower], continued after his death by Andrea Pisano (1290/95-1349) and completed by Francesco Talenti (1300?-1369?).