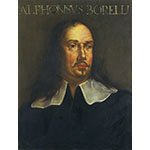 The first documented mention of Borelli - who was born in Messina - dates from c. 1630, when he is said to be a student of Benedetto Castelli (1577/8-1643) in Rome. Apparently, it was Castelli who recommended Borelli to the University of Messina for the vacant chair of mathematics. As a sign of appreciation for his scientific work, the Senate of Messina sent him on a mission in 1641-1642 to the major Italian centers of learning with the aim of enlisting lecturers for the University. In the years immediately following, besides publishing a pamphlet entitled Delle cagioni de le febbri maligna [On the causes of malignant fevers] (Rome, 1649), Borelli began to work on a compendium of Apollonius' four surviving books, not published until many years later (Rome, 1679). He had already begun a revision of Euclid's Elements (published in 1658 as Euclides restitus) when he received and promptly accepted the offer of the chair of mathematics at the University of Pisa. In his decade in Tuscany, Borelli became one of the mainstays of the scientific-experimental programs organized by Prince Leopold de' Medici (1617-1675). He took part in nearly all the experiments performed by the Accademia del Cimento despite frequent clashes with Carlo Renaldini (1615-1679), whom he called the "Simplicius" of the Cimento. But Borelli's chief contribution during his stay in Tuscany was unquestionably his research on Jupiter's moons, described in the Theoricae Mediceorum Planetarum ex causis physicis deductae (Florence, 1666), which played an important role in the European discussions on cosmology. In a self-professed Copernican framework, Borelli voiced the hypothesis of a curvilinear motion of planets driven by two forces: a centrifugal force and an attraction to the Sun, which together would create equilibrium in the heavens. In 1667, Borelli left the Medici family and returned to Messina; in the same year, he published De vi percussionis in Bologna, a compilation and expansion of his research in physics undertaken at the Accademia del Cimento. After the anti-Spanish rebellion in Messina in 1670, Borelli - whose role in the event remains obscure - was forced to leave Sicily. He moved first to Calabria, then to Rome, where he became a member of the Academy founded by Queen Christina of Sweden. His increasingly precarious finances obliged him to accept the hospitality of the Clerks Regular of the Pious Schools (Piarists or Scolopians) in 1677. In his final years, he gave mathematics lessons to novices of the Order and finished what is regarded as his masterpiece: De motu animalium (Rome, 1680-1681). The work presents a mechanistic physiology based entirely on the corpuscular nature of matter. This was an attempt to extend to biology the rigorous style of geometrical analysis used by Galileo (1564-1642) in mechanics.