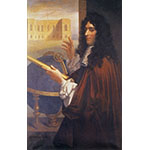 Born in Perinaldo, near Imperia, and studied at the Jesuit college in Genoa. In 1648, traveled to Panzano, near Bologna, at the invitation of the Marchese Cornelio Malvasia, who placed his astronomical instruments at his disposal. In Bologna, Cassini completed his astronomical training with the Jesuits Giovanni Battista Riccioli (1598-1671) and Francesco Maria Grimaldi (1618-1663). In 1650, succeeded Bonaventura Cavalieri (1598-1647) in the mathematics chair at the University of Bologna. In 1653, to study the annual motion of the Sun, he redesigned the gnomon of the Cathedral of San Petronio, built by Egnazio Danti (1536-1586) in 1575. Between 1657 and 1665, Cassini handled a number of political and administrative tasks on behalf of the Papal State. However, he did not interrupt his astronomical studies. He devised a first law on astronomical refraction, the phenomenon that alters the apparent position of a heavenly body near the horizon, and in 1662 he compiled new tables on the annual motion of the Sun. In Rome, met the opticians Eustachio Divini (1635-1685) and Giuseppe Campani (1635-1715). The latter gave him large telescopes with which Cassini made several discoveries. In 1664, he observed the shadows of the four Galilean satellites on Jupiter and determined the planet's rotation period by studying the bands and spots on its surface. In 1666, he also determined the rotation period of Mars, and in 1667 he tried to do the same for Venus. With the Ephemerides Bononienses Mediceorum syderum (Bologna, 1668), he realized the dream of Galileo Galilei (1564-1642) of determining the Earth's longitude from the configurations of Jupiter's moons. In 1669, was elected member of the Académie Royale des Sciences in Paris and invited by Jean-Baptiste Colbert (1619-1683) to head the Paris Observatory. There, Cassini discovered four new satellites of Saturn between 1671 and 1684. In 1675, he stated that Saturn's ring, which Christiaan Huygens (1629-1695) believed to be a single body, was actually composed of small particles. He also discovered the large gap that divided the ring into two parts. In 1679, he presented a large, detailed map of the Moon to the Académie Royale des Sciences.