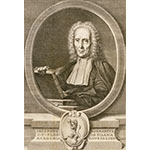 Born in Florence, Giuseppe Averani studied at the University of Pisa, where he obtained a law degree. In 1865, the Grand Duke of Tuscany Cosimo III de' Medici (1642-1723), at the suggestion of Francesco Redi (1626-1697) and Lorenzo Magalotti (1637-1712), appointed him to a chair in law at the University of Pisa. Among his writings on jurisprudence, the Interpretationes Iuris were greatly admired by his contemporaries. Averani was also active in other disciplines: theology, astronomy, philosophy, and - most significantly - experimental physics. He performed various experiments in the Botanical Garden of Pisa, including one with Robert Boyle's (1627-1691) air pump and others on light and the electricity of bodies. At Magalotti's request, he also devoted carried out research on odors. Averani founded the Accademia degli Oppressi [Academy of the Oppressed], where he organized discussions on physics. He was a member of several academies including the Crusca and the Royal Society of London.