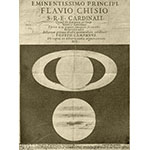 Campani was born in Castel San Felice, near Spoleto. At an early age, he moved to Rome, where he achieved distinction as a watch-maker, mechanic, and optician. Initially, he worked with his elder brothers Matteo, a parish priest and mechanics enthusiast, and Pier Tommaso, clockmaker to the Vatican. In a career of more than fifty years, Giuseppe produced many optical instruments. His compound microscopes and telescopes featured excellent lenses. His telescopes were often more powerful than those of Christiaan Huygens (1629-1695) and Eustachio Divini (1610-1685). In 1663-1664, he invented a special telescope eyepiece that came to be known as the Campani eyepiece. His customers included Cardinals Francesco Barberini and Flavio Chigi, Prince Agostino Chigi, Grand Duke Ferdinand II of Tuscany (1610-1670), and Jean-Baptiste Colbert (1619-1683). His telescopes were used by Giovanni Domenico Cassini (1625-1712) and purchased by by the Paris Observatory, founded in 1667. Campani also performed astronomical observations, detecting - perhaps even before Cassini himself - the rotation of Jupiter and the division of Saturn's rings. In addition to the Museo Galileo, his instruments are preserved in the Conservatoire des Arts et Métiers in Paris, the Observatoire National in Paris, the Medical Museum of the Armed Forces Institute of Pathology in Washington, and elsewhere. Many instruments, tools, and lenses from Campani's optical workshop are preserved in the Physics Institute at the University of Bologna.