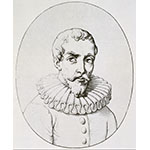 Del Monte studied mathematics in Padua. From 1572 to 1575, he took private lessons from Commandino (1509-1575) in Urbino. In 1577, he published Mechanics. His commentary on the work by Archimedes (287-212 B.C.E.) on centers of gravity appeared in 1588. Galileo (1564-1642) was studying Archimedes's text at the same time and sent Guidobaldo his theorems on the subject. In 1588, Guidobaldo was named inspector of the fortifications of the Grand Duchy of Tuscany. However, he spent most of his time in Monte Baroccio, near Urbino, continuing his studies and experiments and publishing other works on mathematics and mechanics. He remained in intermittent correspondence with Galileo until his death.