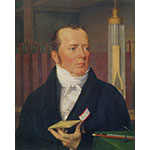 Danish chemist and physicist who made a decisive contribution to the advancement of science in his country. A founder of electromagnetism. In a celebrated experiment of 1820, he showed that an electric current passing through a wire could deviate a magnetic needle. This was the first demonstration of the interdependence between electricity and magnetism. The experiment, which became a classic, was based on philosophical principles, as Oersted believed that all forces were interconnected.

Oersted also worked on thermoelectricity, was the first to prepare metallic aluminum, studied the compressibility of liquids (with an instrument of his invention called a piezometer) and gases, and conducted research on various chemical topics.