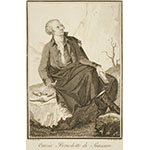 Born into a family that produced many scholars and researchers, Horace-Bénédict de Saussure was one of the most important Swiss scientists of the eighteenth century. Between 1762 and 1786, he was professor of experimental philosophy at the Geneva Academy. In 1783, he published Essais sur l'hygrométrie in Neuchâtel. His Voyages dans les Alpes (Neuchâtel, 1780-1796) contains a detailed study of Alpine geology. De Saussure made many botanical discoveries and observations. Particularly important were his meteorological observations, often carried out on Alpine peaks and rich with original contributions to hygrometry. De Saussure invented many scientific instruments, including a hair hygrometer, an anemometer, an electrometer, and a eudiometer.