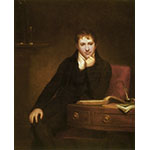 The Englishman Humphry Davy was a key figure in the history of chemistry and physics. He began his career as an apprentice to a pharmacist and surgeon. He was later appointed chemist at the Royal Society of London, a position that allowed him to engage in an intensive experimental program on heat. He demonstrated that heat could be generated by dissipating mechanical energy; he also discovered and described the anesthetic properties of several nitrogen compounds. In 1807, he succeeded in experimentally isolating potassium and sodium and defining their properties. Davy maintained that carbon and diamond were chemically identical: in an experiment performed in Florence in 1814, using the solar furnace incorporating the Bregans lens, he demonstrated that both substances burn at high temperature, without leaving any residue and producing only carbon dioxide. In 1820, he became President of the Royal Society, an office he occupied until his death in Geneva.