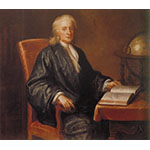 Newton was born in Woolsthorpe, in the county of Lincolnshire, England. After attending Grantham Grammar School, he was admitted in 1661 to Trinity College, Cambridge, where he began to study mathematics under the tutorship of Isaac Barrow (1630-1677). He obtained his bachelor's degree in 1665, but the plague forced him to return to his home village. There, in 1665-1666, he devoted himself full-time to the research that he had begun at university, formulating the nucleus of all his essential future discoveries in mathematics and physics. He returned to Cambridge in 1667, where, two years later, he was elected to the chair of mathematics formerly held by his mentor Barrow. In 1672, at the invitation of the Royal Society, he submitted his paper on the composition of white light. From 1679 on, he focused his attention on dynamics and cosmology; his studies in these fields produced one of the seminal works in the history of science, the Philosophiae naturalis principia mathematica [Mathematical principles of natural philosophy] (1st ed. 1687). After the publication of the Principia, Newton played an active part in public life: he was elected to Parliament and became Master of the Royal Mint in London. He was inducted into all the major European scientific academies, and was made President of the Royal Society (1703) and Baronet (1705). Newton became the most influential scientific personality in England. He died in 1727 and was buried in Westminster Abbey.

Newton's role in the history of science is fundamental. His studies laid the basis for modern optics, infinitesimal calculus, "Newtonian" mechanics, and cosmology. Newton was able to unify the terrestrial and celestial worlds in a harmonious and organic synthesis. He did so by demonstrating that bodies falling "naturally" on Earth and celestial bodies moving in the heavens obeyed a single great law: the law of universal gravitation.