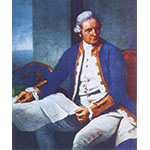 English navigator, began his career in the Royal Navy in 1755. Led three major scientific expeditions. In the first (1768-1770), he discovered New Zealand and explored the eastern coast of Australia. In the second (1772-1773), he discovered New Caledonia, the Marquesas, and the New Hebrides. In the third, begun in 1776, the year in which he became a fellow of the Royal Society of London, he headed north but was prevented by the ice from reaching the north-west coast of America. On his way home, he was killed by the natives of Hawaii. The narratives of his journeys, published by his widow, were translated into many languages.