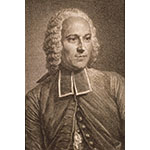 One of the ablest experimental physicists and demonstrators of the eighteenth century. After studying theology, he turned to science, becoming assistant to two already famous scientists: Charles-François de Cisternay Dufay (1698-1739) and René-Antoine Ferchault de Réaumur (1683-1757). They introduced him to the leading popularizers of Newtonian physics such as Theophilus Desaguliers (1683-1744) and Willem Jacob 's Gravesande (1688-1742). In 1740, he became a member of the Académie Royale des Sciences of Paris. He contributed substantially to the dissemination of experimental physics. His enormously popular treatises include Leçons de Physique [Lessons in Physics] (6 vols., 1743-1748, often reprinted) and L'art des expériences [The art of experiments] (1770). He also made important studies in electricity. Nollet invented a wide range of experimentation devices. Many of the physics apparatuses produced for the Museo di Fisica e Storia Naturale of Florence - now preserved at the Museo Galileo - were based on the instructions and illustrations in Nollet's texts.