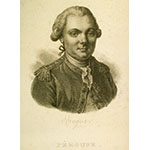 Celebrated French navigator. Was instructed to continue the work of James Cook (1728-1779) and Louis-Antoine de Bougainville (1729-1811). Left France in 1785, circumnavigated the western coast of America, and headed toward Japan across still unfamiliar seas. From Japan, reached Kamchatka, where, in 1787, he sent the traveler Lesseps on an overland journey to France, entrusting him with the task of returning the logbooks and the maps drawn during their voyages. The expedition arrived in Botany Bay in 1788, sent its last messages from there, and was never heard from again.