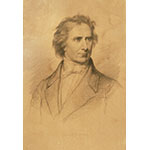 French astronomer, physicist, and politician. In 1806, after graduating from the École Polytechnique, Arago began working with Biot on the measurement of the terrestrial meridian in France and Spain, a project that involved them in surprising adventures. Member of the Académie Royale des Sciences and of the Bureau des Longitudes; director of the Paris astronomical observatory; professor of analysis and geodesy. Discovered the phenomenon of chromatic polarization and, with Fresnel, studied rotational polarization and the interferences of polarized light. In the field of electrodynamics, Arago pursued Oersted's observations on the action of currents and discovered that a spinning non-magnetic plate causes a magnet placed above it to deviate. This important phenomenon of electromagnetic induction was later explained by Faraday. Arago also measured the density, compressibility, and dispersion of gases. In astronomy, he explained the twinkling of stars, measured the diameters of the planets, and studied the solar chromosphere. Deputy in the National Assembly, minister of the Navy, Arago, as a member of the Provisional Government, ordered the abolition of slavery in the French colonies in 1848.