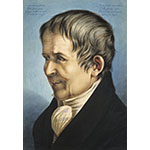 Born into a poor family, Pons was hired as a porter by the Observatory of Marseille in 1789. He learned astronomy from the Observatory's directors and soon began to make observations that led him to discover new celestial bodies, particularly comets. For these achievements, he was named adjunct astronomer and later vice-director of the Observatory. In 1819, he was called to Lucca by Duchess Maria Luisa of Bourbon (1782-1824) to direct the Marlia Specola [Observatory]. In 1824, after the closure of the facility, Grand Duke Leopold II of Tuscany (1797-1870) appointed Pons director of the Observatory attached to the Museo di Fisica e Storia Naturale of Florence, where he remained until his death.