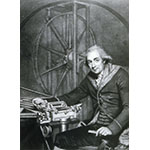 One of the most famous English scientific-instrument makers of the second half of the eighteenth century. In 1775, invented a semi-automatic dividing machine, capable of marking graduated scales on sextants and other nautical and astronomical instruments. Developed improvements in the manufacture of sextants, theodolites, barometers, micrometers, and countless other devices. One of the most important instruments built by him is the great astronomical circle of the Palermo Observatory. In 1786, elected fellow of the Royal Society of London and, eight years later, member of the Imperial Academy of Saint Petersburg. In 1795, won the Copley Medal, the highest scientific award of his time: the prize was established in 1736 by the Royal Society, thanks to a bequest from Sir Godfrey Copley.