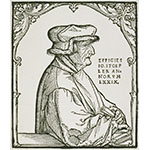 German astronomer and mapmaker, known by the Latin name of Stofflerinus. Professor of mathematics at the University of Tübingen. Wrote several works that were widely circulated in sixteenth-century Europe. They include the Ephemerides (1482), in which he predicted eclipses and astrological events up to 1518, and the Elucidatio fabricæ ususque Astrolabii, published in Oppenheim in 1513, in which he described an astrolabe design extensively cited by later authors. Invented a special model of quadrant that became known as the Stöffler quadrant.